In a previous post we discussed California’s Self-Generation Incentive Program (SGIP) and how it can help increase a building’s resiliency by providing a source of backup power in the case of a temporary grid outage. Besides resiliency, being able to time-shift energy consumption using an on-site battery has other benefits for a building owner as well:

It is worth noting that both of these objectives relate to building-level optimization from a financial or an environmental impact point of view. But how does time shifting demand using batteries under these goals affect overall CO₂ emissions from the power grid?

Installing an on-site battery at a building could actually increase overall CO₂ emissions because procuring raw materials and manufacturing batteries generates emissions. Furthermore, charging and discharging a battery results in round-trip losses which increase overall energy usage. Hence, deploying batteries is only sensible from an environmental point of view if:

The California Independent System Operator (CAISO) grid has relatively large amounts of renewable energy, which decreases its overall CO₂ intensity. However, not all kilowatthours are created equal: looking at CAISO data, we can compute the grid’s CO₂ intensity per MWh for various times of the day and see that a grid with comparatively large amounts of renewable energy in its mix can show significant fluctuations in CO₂ intensity during the day. 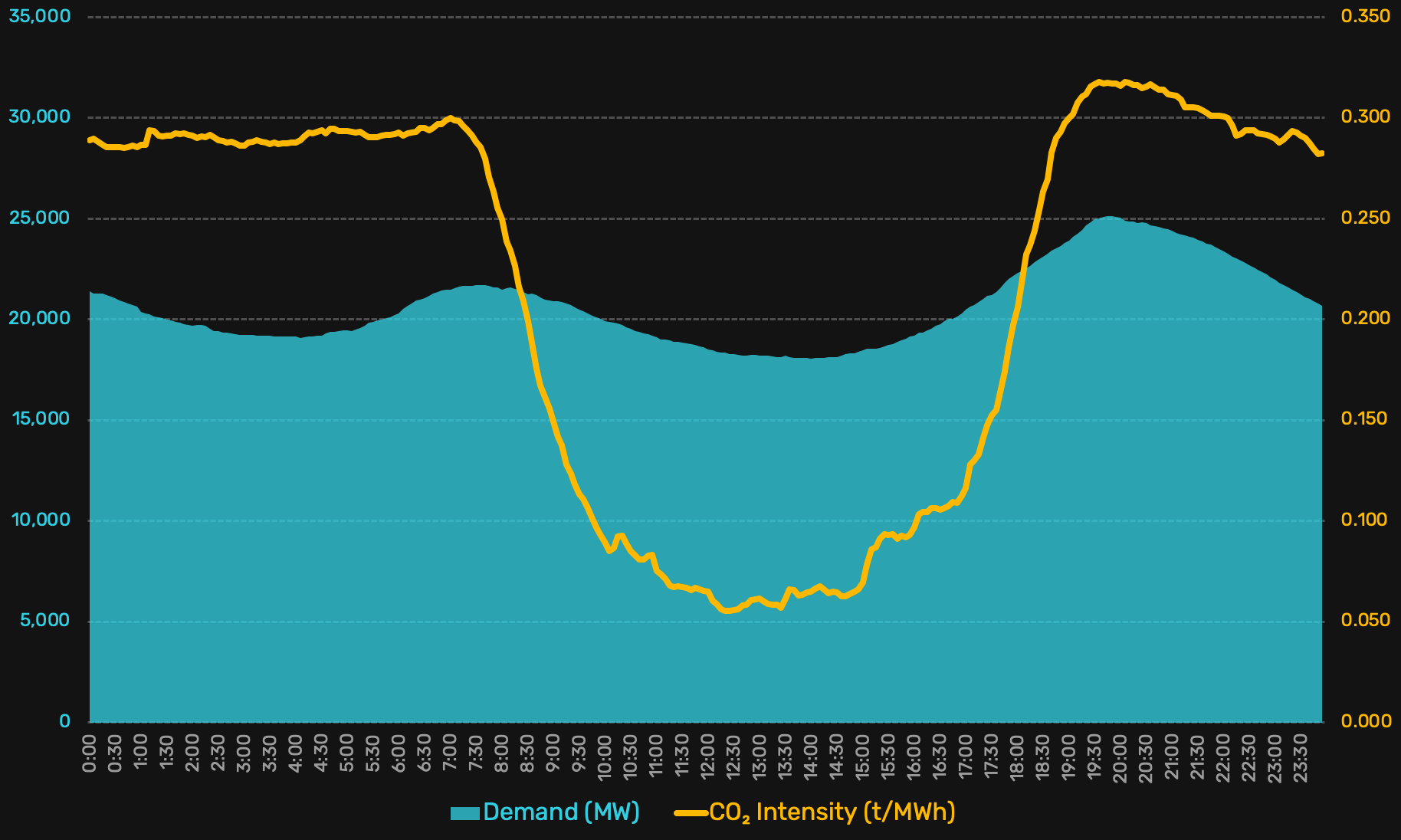 An example on the other extreme would be Dec 23rd, 2019, which saw very little variability in terms of CO₂ emissions per MWh during the day:

What if we took advantage of these daily fluctuations and time-shifted consumption by charging a battery during times of low CO₂ intensity and discharging it at times of high CO₂ intensity? Would the daily swings in CO₂ intensity in the CAISO grid be large enough to result in CO₂ emissions being saved overall?

In order to answer this question, let’s assume a hypothetical battery with:

Looking at CAISO data from the past two years (from 6/28/2018 to 6/28/2020), we can evaluate the performance of our hypothetical battery in terms of avoided CO₂ emissions. To do that, we assume the battery is charged for 2 hours when the grid is “cleanest” and discharged for 2 hours when the grid is “dirtiest”. Note that we don’t require a single continuous 2-hour window. Running simulations with our hypothetical battery against CAISO data shows that:

Unfortunately it is quite difficult to find good estimates for the overall CO₂ emissions for battery manufacturing, but there are two data points that should give us ballpark figures:

If we can avoid 47 tons of CO₂ emissions per year with a 1 MWh battery, this means a battery would erase its own carbon footprint in about 2 to 3 years when manufactured with today’s technology.

As mentioned at the beginning of this post, an on-site battery might get deployed with the goal to reduce demand charges or to increase electricity self-consumption. These use cases might result in a charge/discharge schedule that reduces rather than increases avoided CO₂ emissions.

During our simulations over a 2-year period using CAISO data we arrived at the following charge/discharge schedule when attempting to maximize CO₂ emissions avoidance. 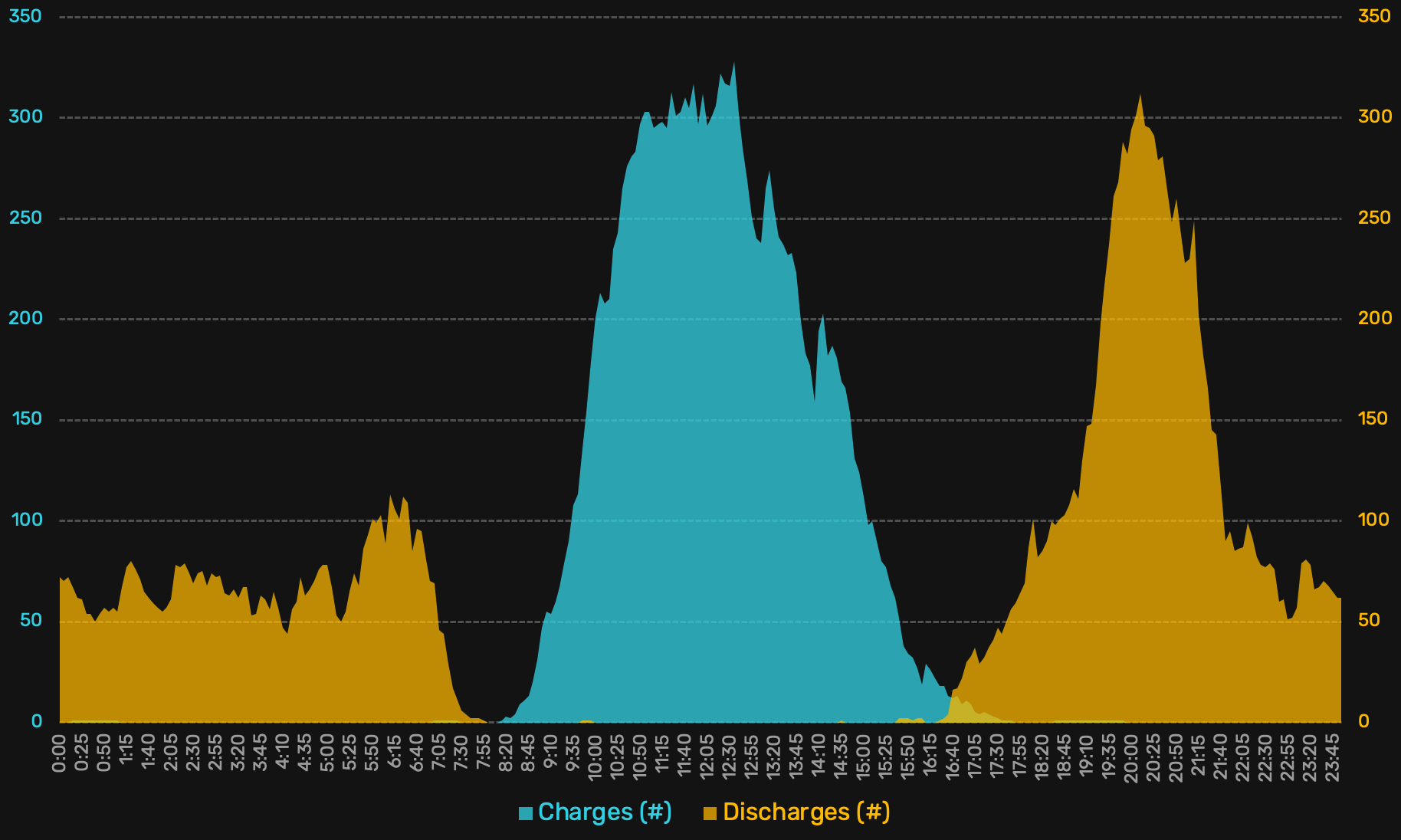 It is also apparent that dispatching the battery to maximize peak shaving doesn’t align well with maximizing avoided CO₂ emissions: There is a large fraction of discharge time between the hours of 10:00 PM and 6:00 AM, which is not a time during which commercial buildings are likely to experience peak consumption.

At the building level, it seems that dispatching the battery to maximize electricity self-consumption is likely to result in more avoided CO₂ emissions than aiming to maximize peak shaving.

Station A has evaluated about 134,000 commercial and industrial buildings within CAISO and assessed their technical and bill savings potential for an on-site battery, either deployed stand-alone or combined with solar (see the latest data in the Station A App). Our analysis shows that deploying an on-site battery in combination with on-site solar unlocks far greater financial potential:

Furthermore, combining on-site solar and battery yields significant bill savings (more than 10%) for 56% of the buildings evaluated, corresponding to 24 GWh of battery capacity (see the latest data in the Station A App). This is roughly 53% of the 45 GWh of technical potential we identified in CAISO.

Looking at CAISO data, producing the electricity traded through CAISO in 2019 resulted in 51 Mt CO₂ emissions. Assuming that all the batteries with positive financial potential we identified within CAISO actually were to be deployed and dispatched according to the average CO₂ intensity of the grid at any given time, the avoided CO₂ emissions would only increase by about 1.7 Mt, or about 3% of total CO₂ emissions.

Therefore we must conclude that while it has other benefits, an on-site battery doesn’t offer significant potential for avoided CO₂ emissions at the grid level when its dispatch is controlled by building-level goals.

After going through these analyses, we’ve come out with a few key learnings:

In the next part of this series, we will explore how to tap into the full potential of batteries to impact CO₂ emissions!

📚 What to Read Next